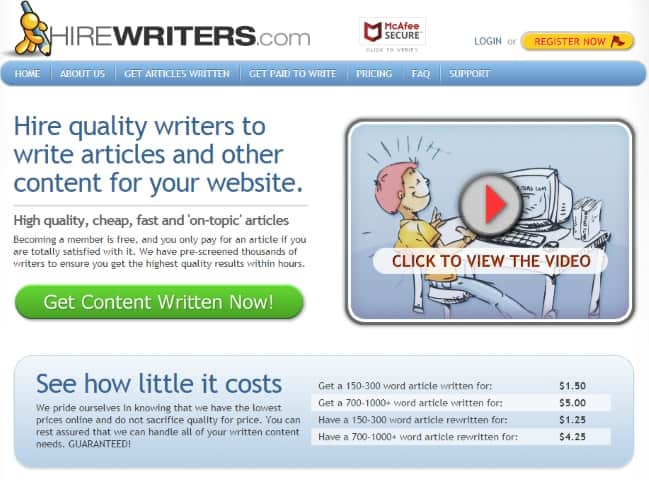 In this post, I’m going to analyze HireWriters– showing you how I use it to generate quality content at a decent price.

HireWriters is an affordable Native-English content marketplace. If you’re unfamiliar with using text brokerages, this is a ‘self-managed’ option.

Meaning, you place the content orders and then accept or reject the finished article. Compared with managed options, where the text brokers facilitate the process, self-managed content brokerages are generally cheaper.

HireWriters has become my favorite article-writing service because the writing is Native English, the turnaround is quick, and the pricing is surprisingly cheap. 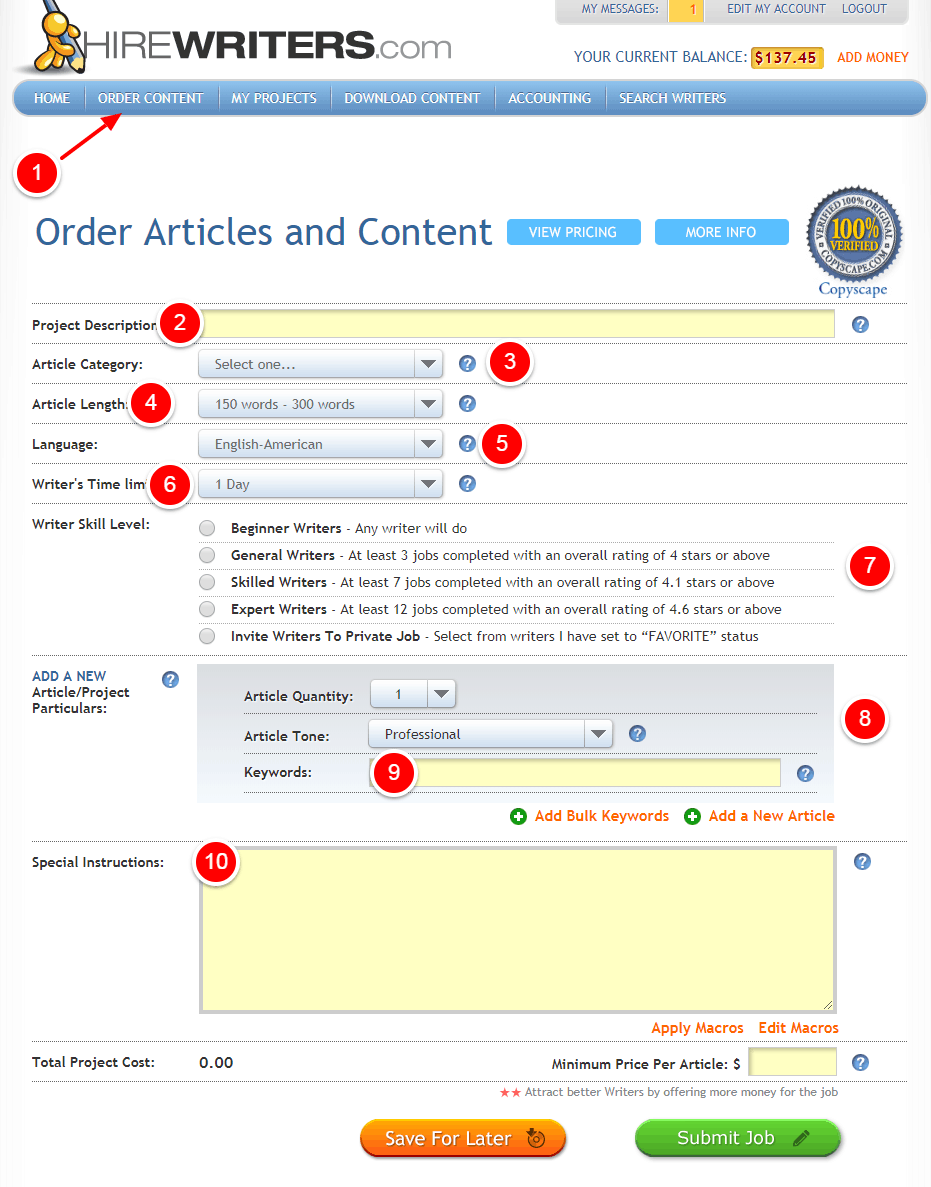 The step by step process is outlined below:

CREATE HIREWRITERS ACCOUNT
You can also search out individual writers by a range of criteria. If you want to quickly build up an army of vetted article writers, this is a quick way to do it: 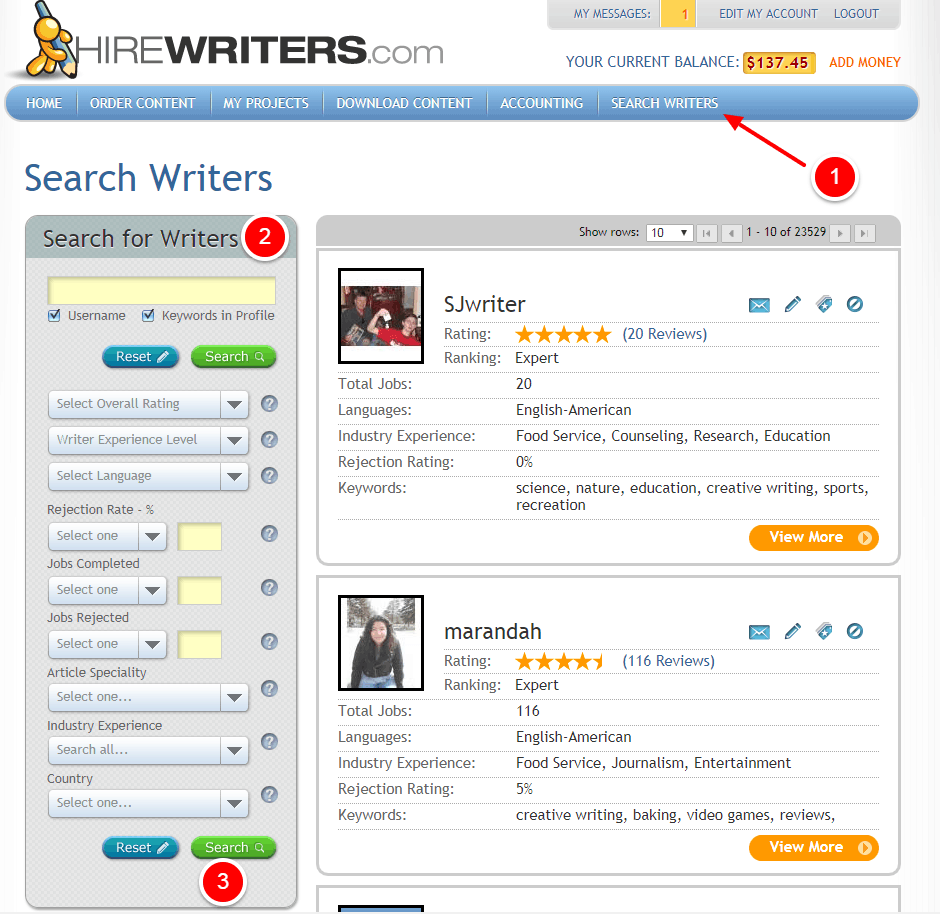 As you can see in the screenshot above, there’s a range of filters you can apply to screen the marketplace’s writers.

You can filter them by their Overall Rating, their Experience Level, their article’s Rejection Rate, how many jobs they’ve completed and even by their Specialty and Industry.

I like that they include photos, as well- other writing platforms I’ve used keep things pretty anonymous. The photo adds a bit of personality- and this added accountability probably improves the quality of their output.

HireWriters has a bunch of different content types you can order:

If you’re reading this post, most likely you’re going to be ordering from the Articles category.

I published the pricing below:

When I hire UpWork writers, that’s the pricing I’m looking to hire for. So to get that pricing from a text broker is pretty surprising. Text brokers provide speed and convenience- which is great.

Though there’s a lot of benefits to working with a dedicated freelancer from a platform like UpWork. But- you can ‘favorite’ writers inside of HireWriters, so it is possible to build up a cadre of trusted article writers on the platform.

How I Use It

I created a detailed Google Doc that explains the writing task- I link to it in the Special Instructions section, asking the writers to review it before they begin writing.

I’ve found that this is the easiest way to work with a text broker.

By providing detailed instructions in a Google Doc, which I routinely tweak and optimize, it’s an easy way to help guarantee a quality outcome.

Below I embedded one of my article-writing project guidelines. Feel free to download it- you can upload it to Google Docs, generate a shareable link, and use it within HireWriters when you submit orders.

The instructions are geared towards creating keyword-optimized content based on a single keyword- it trains the writers to perform some basic keyword research.

And it means I don’t have to spend a lot of time creating custom instructions for each piece of content I create- for example, specifying the different keyword concepts and themes that should be in an article.

As well, it instructs them create a free Grammarly account to spot-check their writing and use a keyword-density tool to avoid over-optimized content.

How To Start A Music Blog [Niche Report]
If you're a musician, or an enthusiast that just wants to start a music blog, this next niche could be ...
Read More
Ranking For Antiques: How To Build A Collectibles Website
Growing up, my family collected a lot of antiques. My parents were friends with a heavily tattooed antique dealer and ...
Read More
How To Create A Video Aggregator Site
In the early days of my internet marketing career, I was obsessed with automation. I bought all the gray-hat, automation ...
Read More
How To Start A Profitable Local News Website
I was recently reading a Guardian news article bemoaning the death of local journalism: Small-town Alaskan newspaper seeks new owner ...
Read More
Ranking For Random Dates In Time
In the past, I've written about a variety of niches that are somewhat strange and obscure. These include expired food ...
Read More

Pricing: I’ve found the writing quality to be the best bang for the buck compared with all the other text brokerage services I’ve used.

Quality: As of yet I haven’t rejected any written content- it definitely feels like the writers are Native English. Plus I often get questions from the writers about the task- that’s great because it shows they’re actually invested in a quality outcome, as opposed to just churning out low-quality articles.

External Linking: The ability to link to a Google Doc. Some of the text brokers I’ve experimented with prohibit you from externally linking- so I can’t link to my Google training document. That’s a hassle because I include several screenshots in the document which helps the writers perform on-the-fly keyword research.

Plagiarism detection: HireWriters says that they employ the Copyscape API to automatically scan submitted content to make sure that it’s original, and not plagiarized. I’d still recommend spot-checking it every so often with CopyScape.

Update: I used CopyScape to spot-check an article I received from HireWriters recently and did receive a plagiarism hit. I wrote to their support and received the following response:

“We use the copyscape API, which is based on a percentage of similarity. We set the strictness level to around 80%, meaning, it must be 80% or higher to pass.

We do this in order to allow common sense similarities to pass, and not get flagged by copyscape.”

So- just keep in mind that the ‘strictness level’ currently is set to 80%. I’m not as paranoid about ‘duplicate content’ issues as I used to be- in fact, one technical SEO I know says that in his testing as long as the content is more than 50% unique, the content will be indexed as unique by Google.

User Interface: A minor gripe- the User Interface looks very dated and, while functional, can be somewhat confusing when you first begin using it.

If you like HireWriters and want to recommend it a friend- you can sign up to their affiliate program. How much can you earn?

According to their affiliate page, you’ll earn “$5 for each client you refer that makes a deposit plus 50% of the future net profits!”

I’ve just started promoting them- and it’s an easy recommendation because, as I’ve outlined, the content quality is well above average for the price.

HireWriters is one of the best deals for content on the internet right now- and I’ve used every imaginable article-writing service.

It’s fast, cheap and decent quality- I recommend trying it out whether you’re just beginning your internet-marketing journey or are a grizzled IM veteran looking to rank content in the SERPs.

I've spent a lot of time poring over Flippa auctions trying to find a steal. Some under-monetized property that just needs a couple of...
Read more
Niche Business Ideas

How To Start A Car Blog [Niche Report]

How To Start A Music Blog [Niche Report]

If you're a musician, or an enthusiast that just wants to start a music blog, this next niche could be an excellent opportunity for...
Read more
Tutorials

In this post, I'm going to analyze HireWriters- showing you how I use it to generate quality content at a decent price. HireWriters is an...
Read more

In this post, I examine 5 YouTube video description templates from successful YouTubers, including some copy and paste templates. As I've grown a modest YouTube...
Read more
Tutorials

I've earned millions of dollars from Amazon's affiliate program. So I have a lot of experience managing Amazon affiliate links, optimizing for conversions, and maintaining...
Read more
Tutorials

When I first started building affiliate sites in 2015, there were a few foundational gurus that I followed. Patt Flynn from Smart Passive Income was...
Read more
Tutorials

APPLY TO AUTHORITY.BUILDERS I first started building niche affiliate sites in 2015. Like everybody else, I eventually collided with the familiar and frustrating conundrum: how...
Read more
- Advertisement -