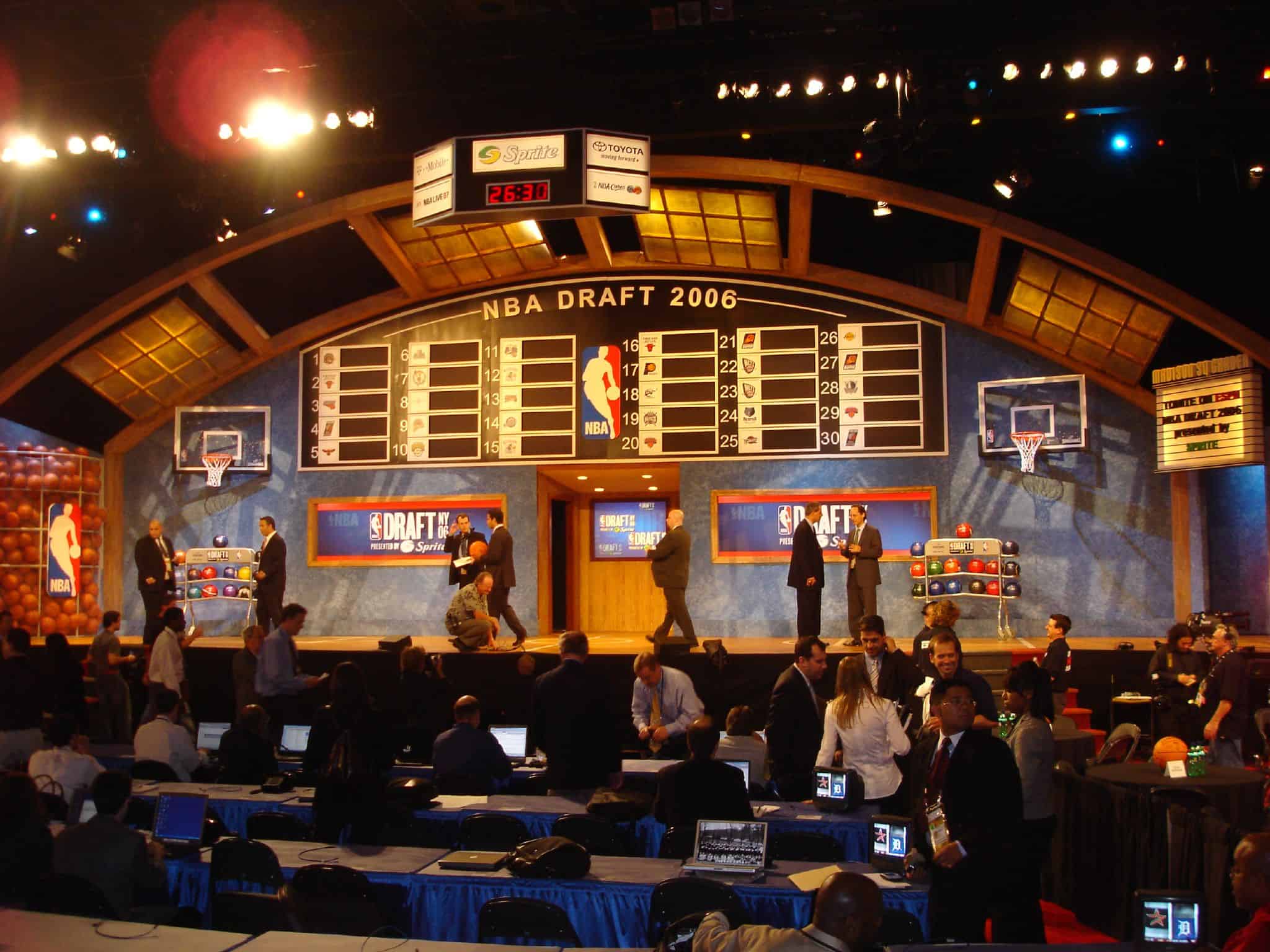 Besides spending hundreds of hours a year lurking inside a certain basketball forum, I love NBA mock draft sites.

As a long-suffering Knicks fan, most recent seasons have ended with a lottery selection in the NBA draft.

NBA fans like me spend countless hours analyzing prospects over the course of the year.

Hoping they have the opportunity to draft a blue-chip player who will reverse their fortunes.

(Welcome To The Knicks, RJ Barret!)

With that out of my system- let’s move on!

As an internet marketer, however, the insane traffic and ad revenue potential of these sites is not lost on me.

Lots of sites like The Ringer and CBS Sports do their own mock drafts- capitalizing on the tremendous demand for player intel.

How Do They Make Money

While The Ringer does sell some of its own products and CBS presumably supplements ad revenue with cable subscription calls to action, most of these sites make money from running ads like AdSense, Media.net, or their own private-label brew.

A site like NBADraft.Net runs a bunch of display ads: 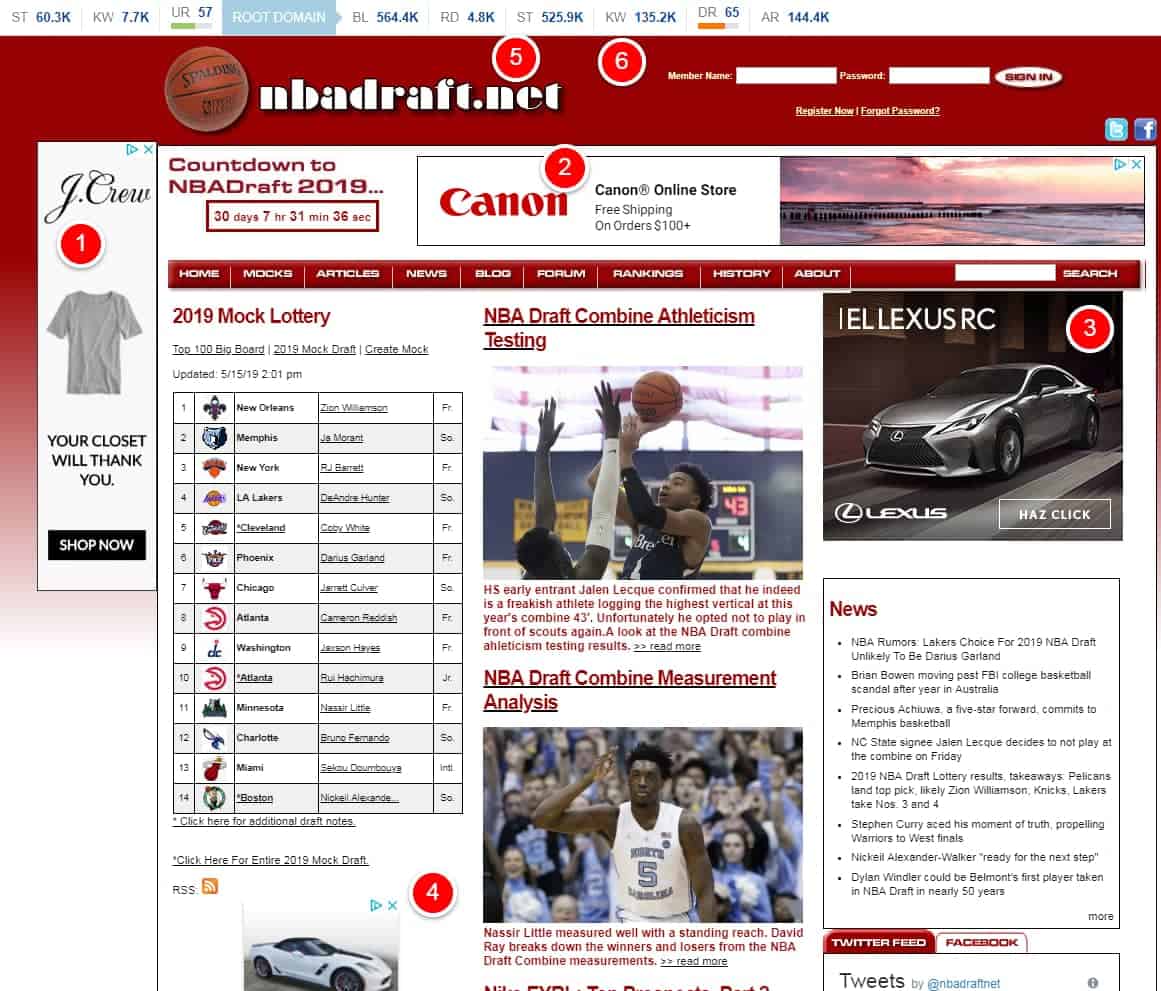 According to SimilarWeb, it’s averaging 2.2 million visits the last 6 months with users visiting an average of 3.13 pages per session.

How Much Do They Make?

If you wanted to calculate their actual, monthly CPM ad earnings- you could multiply 2,200 (visits) x 3.13 (pages per visit) by an estimated CPM like $12.

In that case, that’s an estimated $82,632 in average monthly earnings. It’s also certain that their site traffic is spiking in June when the NBA draft occurs- so maybe multiply that number by 2 or 3x.

Tankathon also runs ads- really the only way to monetize the NBA draft unless you can figure out how to hawk your own or other brands’ sports merchandise: 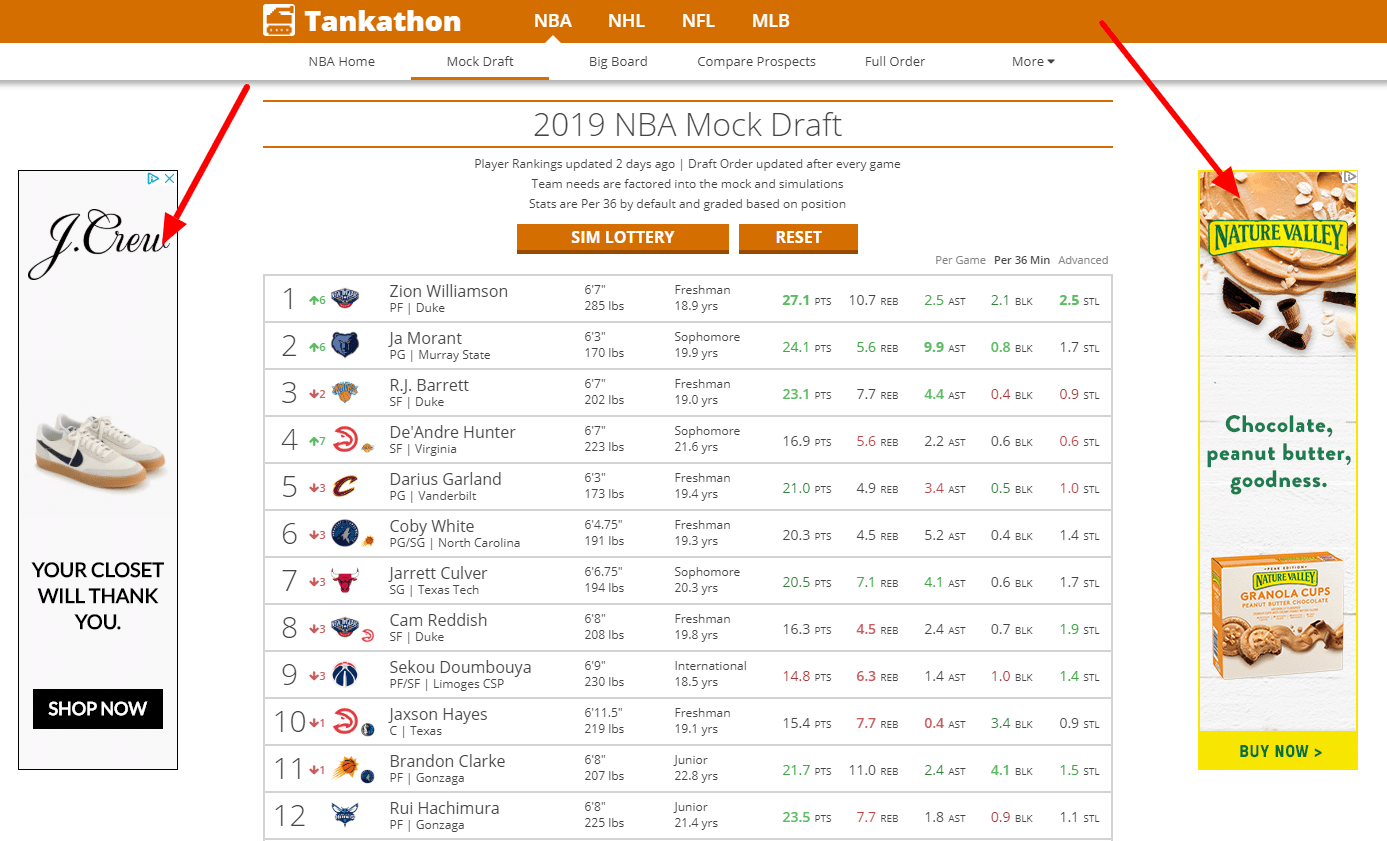 As an aside- one good affiliate option for an NBA draft site is to enroll in the Fanatics affiliate program. This sports store has a ton of merchandise that you won’t’ find on Amazon.

You can actually create keyword-targeted, Fanatics Product Showcase affiliate ads from within ShareASale and insert them into your content. I run these ads on a site I own- here’s a screenshot of an ad using the “NBA” keyword :

Below I did some keyword research and extracted 1,000 of NBADraft.Net’s top-performing organic keywords. Keep in mind, they get a lot of direct traffic, as well, from people who are just tying their site directly into their browsers.

You can see that they have some pretty strong rankings.

If you were to dissect a larger NBA site like NBA.com, obviously there’s a much broader focus with more content themes to explore as a site builder:

The point being, if you were to enter this niche, you’ll want to choose a focus.

Remember, there are tons of keywords lurking behind all these ‘parent topic’ terms. Just look at some of the keywords that sit beneath a term like “Lebron James”: 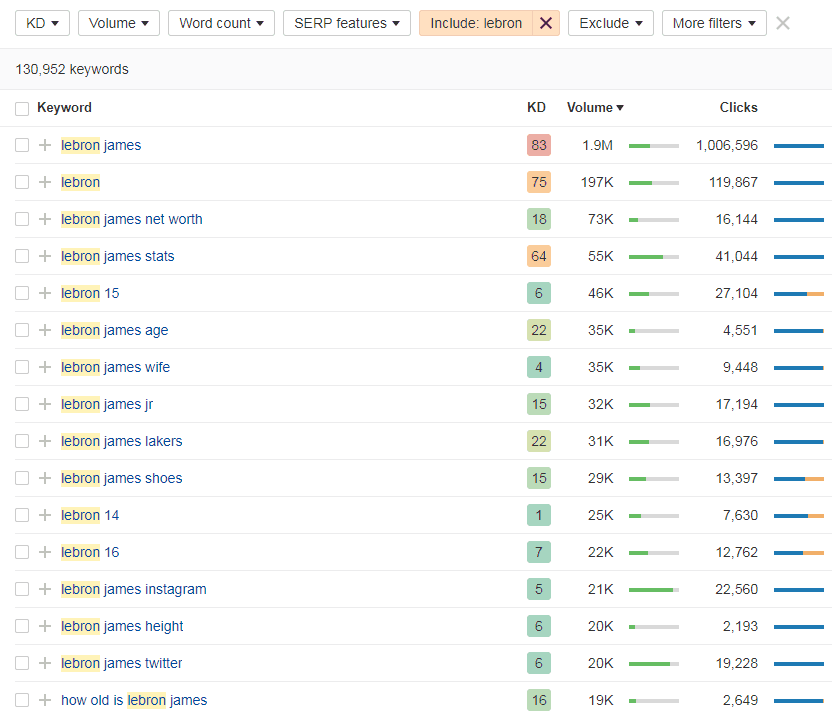 What I Would Do

If I were entering into this niche, I’d consider the ‘content scope’ of my site.

Do I want to purely focus on the NBA draft like NBADraft.Net does?

Do I want to purely do mock drafts for all sports like Tankathon does?

Do I want to be a sports publication like The Ringer- publishing tons of multi-channel, high-quality content (i.e. podcasts, videos, articles, etc.)?

Myself, as a smaller, solorepeneur enterprise- I’d want something more manageable than The Ringer but a bit broader than NBADraft.Net.

I would definitely build out a mock draft page- regardless of the overall angle I take on the niche. That would, for sure, be one ‘silo’ of content on the site.

Each player would get their own profile page containing at least 700 words of text. I’d include links to YouTube scouting videos and the feeds from the player’s social profiles to easily boost site engagement (RJ Barret example).

There are hundreds of prospects eligible for the draft every year- each of these players get some degree of search traffic.

You could pretty easily curate some decent content on these prospects. In addition, you could find some writers to create a scouting analysis of each player.

You can even find NBA fans on the RealGM forums and recruit them.

Keep in mind that a draft site can compile information about past and future draft prospects as well. This adds up to thousands of low competition keywords that you can rank for.

The more content you have on the draft analysis page of each player, the more ads you can run. This is pretty important from a revenue perspective.

You can see that this NBADraft.Net RJ Barret page runs ads around the perimeter of the page- but has no ‘in-content’ ads. 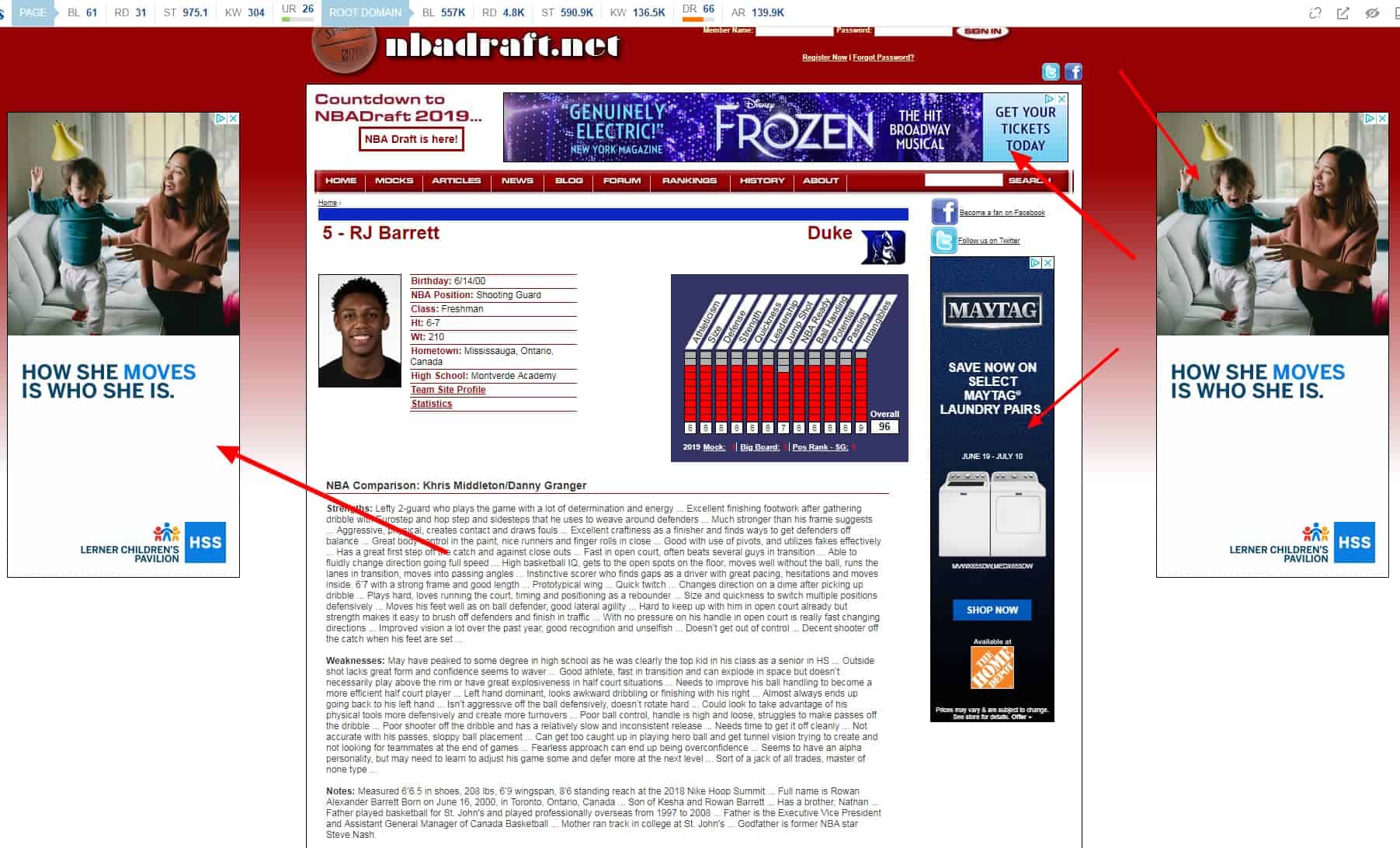 I’ve seen some big sites rank for a particular player and get a lot of search traffic but they have very little text on the page.

This means that you can’t run as many in-content ads.

If I were entering into this niche, I might consider broadening the scope of the site so that it is not exclusively a draft site.

That site currently ranks for close to a million keywords.

Ultimately, it would depend on what you like to do. The Ringer, for example, produces high-quality editorial content.

If you enjoy writing editorials about basketball, I would divide the site between content like that that is really high quality and some clever organic traffic strategies.

For example, leveraging semi-scraped, NBA stat information like Basketball Reference does or draft prospect landing pages like NBADraft.Net does.

You can push site traffic to your editorials- which might not get a ton of organic on their own.

If you’re into sports, there’s some decent traffic in this niche.

Lots of people start sports sites and they never get off the ground.

That’s generally because they lack an understanding of traffic acquisition strategies.

If you want to produce quality editorial content on your favorite team- also produce a silo of pure, SEO content and funnel that traffic to your opinion articles. It’s a recipe for success!