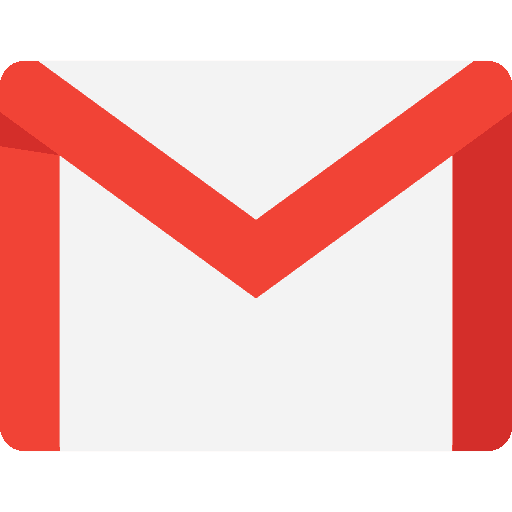 Pricing is competitive- good value for the features you get

Really shines here: easy to use and even create pretty advanced email automations

Stellar support: live chat is always on point and tons of support documents

I started out using AWeber on a now-discontinued chronic pain website.

AWeber is an old-world, internet-marketing autoresponder.

It was a solid, functional tool and a lot of people have made a lot of money using it.

However, I eventually switched everything over to MailChimp.

I don’t even remember why- this was in 2016…it might have been a better deal.

And I was certainly more frugal back then.

Getting Banned From MailChimp

I began using MailChimp for NicheFacts’ email content, when out of the blue they terminated my account.

On the hunt for a new provider, I had heard several podcast interviews with the founder of Convertkit.

In addition, as a Smart Passive Income listener, I knew that Pat Flynn was on the board of the company.

They were relatively new on the autoresponder scene- but promised a modern, email marketing solution for online creators.

I wanted something simple and clean, but powerful enough for my needs.

Instead of a full, in-depth tutorial, I’m going to highlight some of the things I like about ConvertKit.

And some things I don’t.

*I am an affiliate for ConvertKit- so I’ll receive a commission if you make a purchase through one of the links on this page.

If you want some truly detailed information about how ConvertKit can work for you, I'd recommend hopping on one of their short webinars.

You will also get access to a bunch of free stuff, and hopefully a little encouragement, too. There really are people out there just waiting to join your email list, and this short training will help you find them: 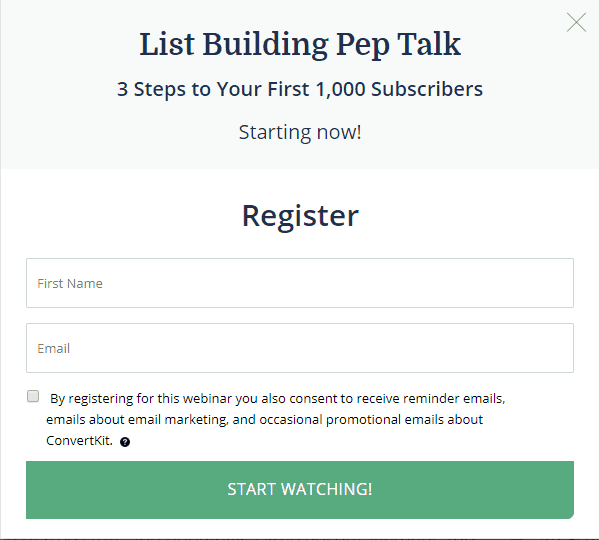 As opposed to AWeber’s somewhat stodgy appearance, ConvertKit has a clean, modern interface.

This is another big one.

For example, say I want to create an opt-in form for a specific post, send those subscribers 3 emails, and then 2 days after the last email add them to another list, it’s incredibly simple to accomplish:

It’s pretty simple and it works.

Check out this video overview by ConvertKit- it’ll show you how easy these visual automations are to set up:

ConvertKit also will do a free migration- transferring your subscribers and sequences from your current provider: 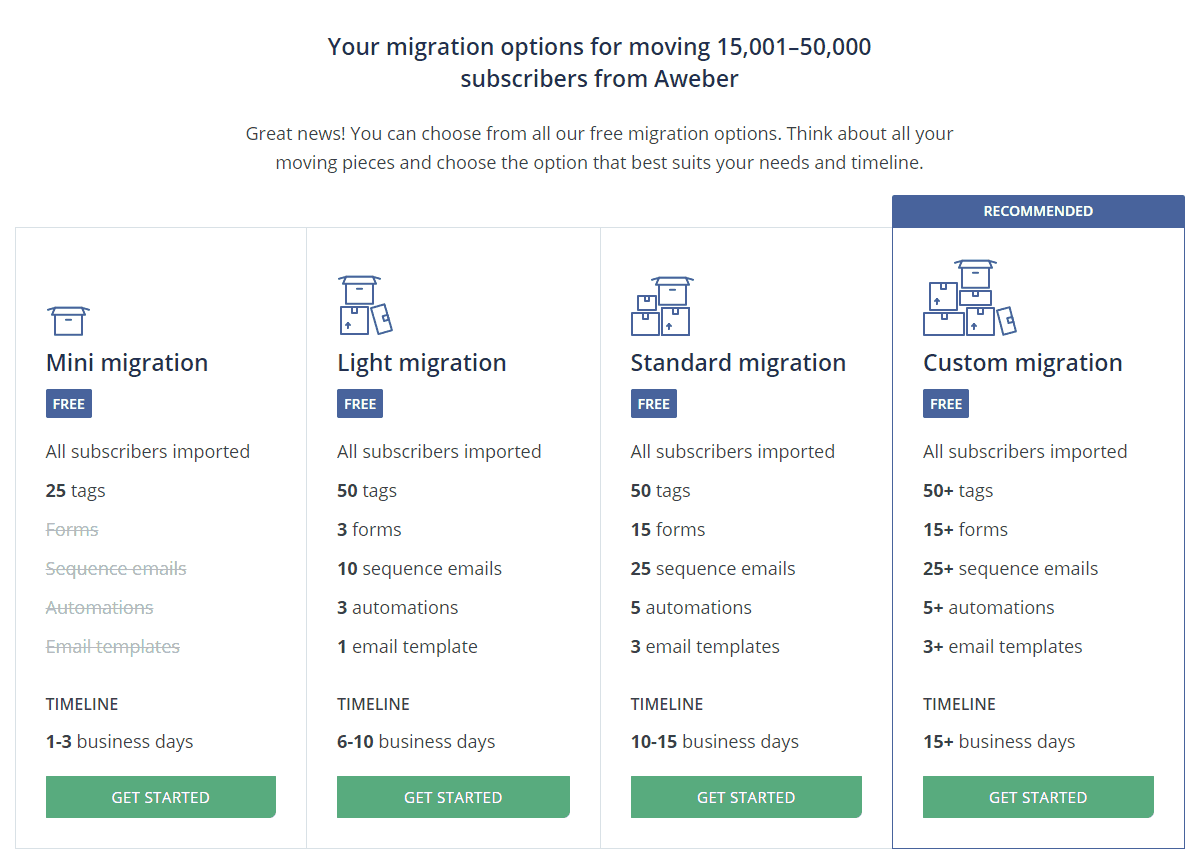 That’s enormously helpful, and something that I used when I transferred from MailChimp.

ConvertKit also makes Analytics accessible and simple. Here’s one view of an autoresponder sequence- all the relevant stats are neatly laid out alongside the specific email: 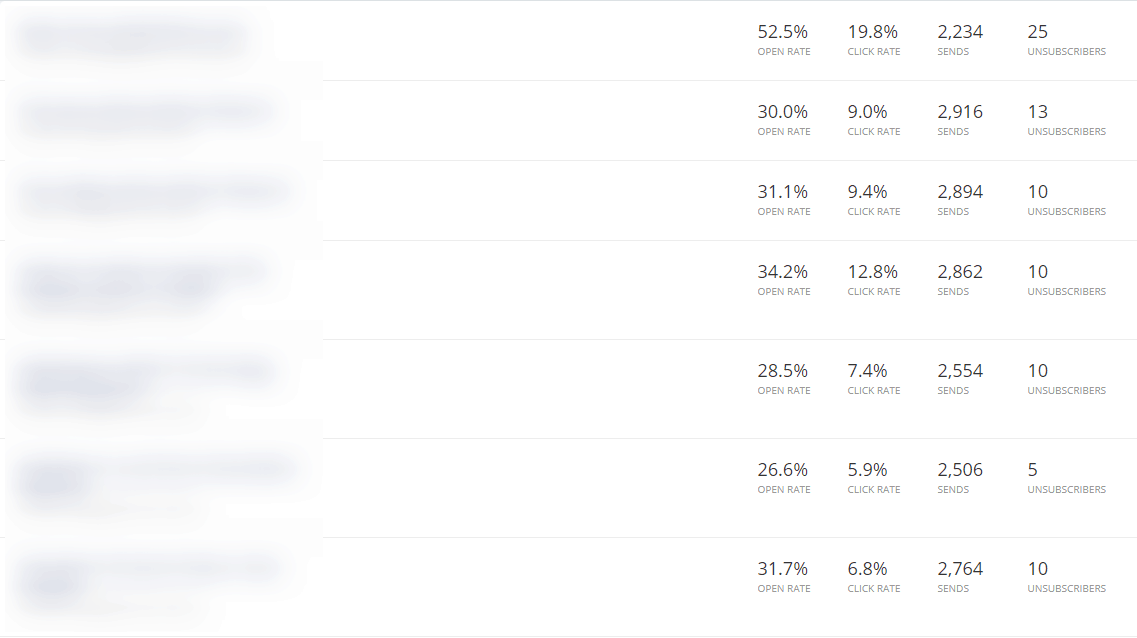 There are a variety of views you can get- whether that’s diving into individual subscribers or examining the performance at the Visual Automation level.

I don’t really use this feature- but it can be immensely useful if you want to quickly create landing pages that aren’t hosted on your site.

Say you’re running a webinar and you want to start collecting emails from a conversion-optimized landing page- you can quickly create a landing page inside of ConvertKit and instantly get a live URL to share:

You can also embed these landing pages on your website.

ConvertKit lets you do some pretty advanced stuff.

I don’t personally need too much of this.

But, you can do some fancy click-triggering, for example: 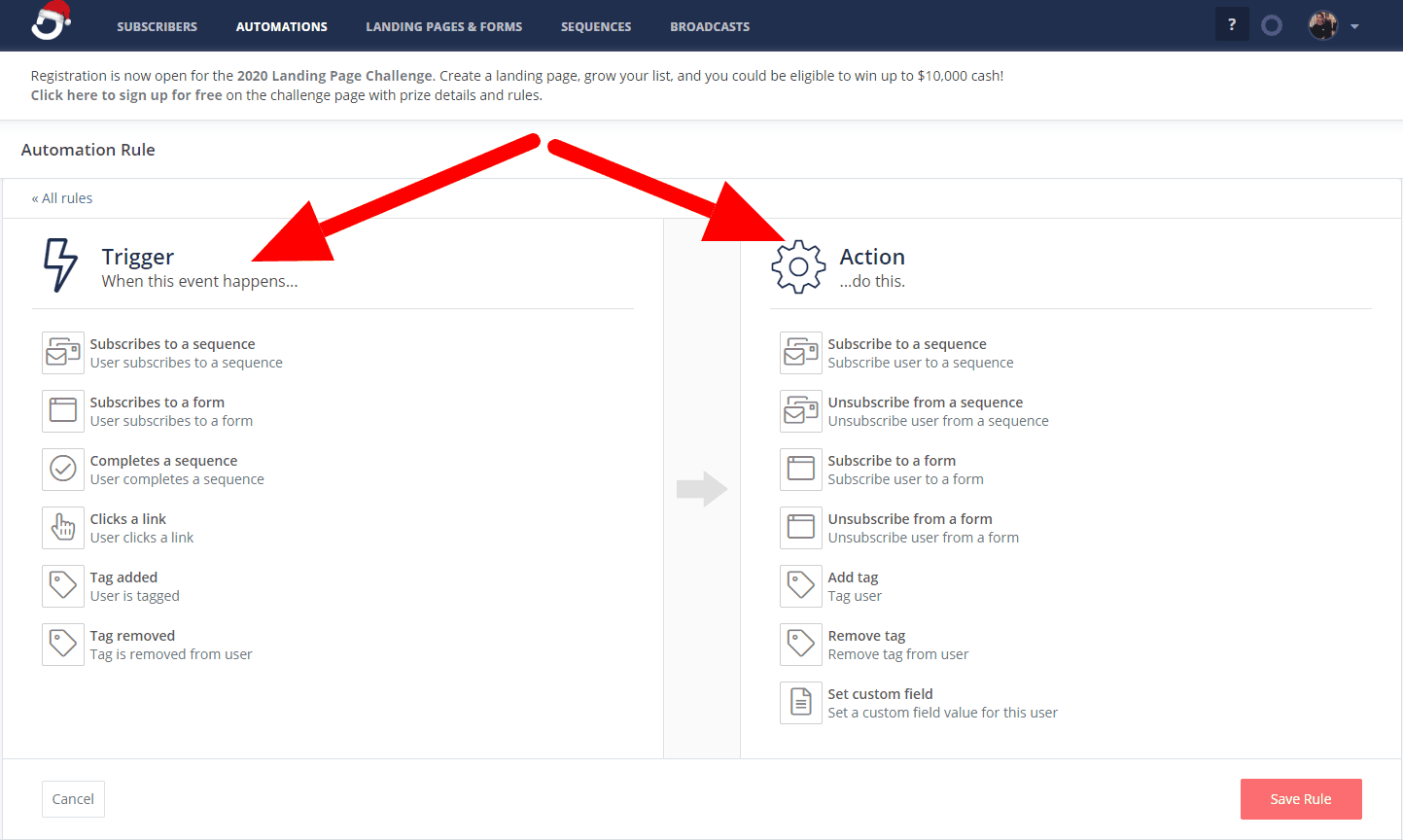 So, for example, say you want to segment your list…

You want everyone who clicks a particular link to be opted in to a new email sequence- it’s simple to do.

This is great if you want to run an offer to a subset of your list. Users can click and be automatically opted-in and you don’t annoy the entirety of the list with an offer they’re not interested in.

I haven’t had to use it often, but whenever I have, support has been very quick.

Plus, there’s always a live chat option on the website: 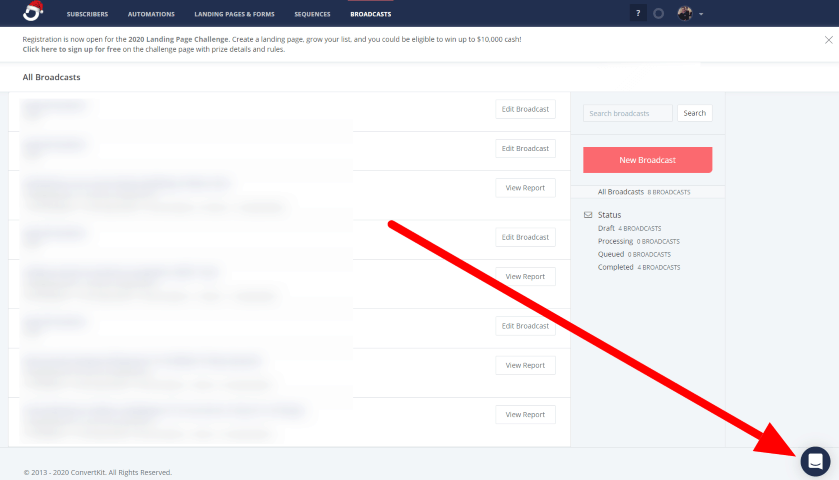 ConvertKit lets you build forms, but the design tool isn’t that great- not nearly dynamic enough to function as a robust lead capture instrument on your website.

You don’t need to use ConvertKit’s forms on your website.

The way I do it, I use lead capture tools that integrate with ConvertKit, like Convertful, Thrive Leads and Bloom, to design my popups and banner optins.

These tools are way more dynamic than what ConvertKit provides.

If I were starting all over, I’d probably test out OptinMonster to capture leads on the site and integrate it with ConvertKit.

I’ve read some good things about it- that it has outperformed a variety of other tools.

At this point, it would be a huge hassle to unwind my current lead captures, recreate them all within OptinMonster, and basically split test them…

Here’s a form building tutorial so you can get a sense of how form-building works:

You can’t do much split testing with ConvertKit.

The way it works today, you can only split test Broadcast emails (those one-off emails you blast to a list/segment of subscribers).

And even then you can only split test the subject lines:

So, if split testing emails is important to you, it’s best to go with something more robust like ActiveCampaign.

The Psychic Niche | Monetizing Astrology, Tarot and Afterlife Pet Communications
Whether you think psychics are con artists or not, there's a lot of money to be made in this niche ...
Read More
The 25+ Best Insurance Affiliate Programs | How To Monetize Them
The international insurance market is a trillion-dollar industry (Source). Selecting the right coverage can be incredibly complex for buyers, with ...
Read More
How To Play Candy Crush For A Living
If you grew up obsessed with playing video games, you probably entertained fantasies of doing it professionally. Maybe you dreamt ...
Read More
The Tea Niche: How To Start An Online Tea Shop
With over 2.5 million monthly searches, tea is a $12 billion market in the United States (Source). This is an interesting ...
Read More
How To Start A Music Blog [Niche Report]
If you're a musician, or an enthusiast that just wants to start a music blog, this next niche could be ...
Read More

Obviously, the biggest thing with an autoresponder is getting the emails delivered.

It’s a large technical challenge and there are a variety of factors at play.

For example, Gmail is notorious for pushing emails you’ve subscribed to into their Spam folder.

Testing deliverability is a bit difficult to assess- though according to AuthorityHacker’s testing, “ConvertKit achieved the highest open rate of 39% in the given time frame.”

ConvertKit’s robust support documentation has a lot of information regarding deliverability optimization.

I’d say pricing is a pretty strong selling point, considering the features you get. You can pay annually at a discount or monthly based on your subscriber count: 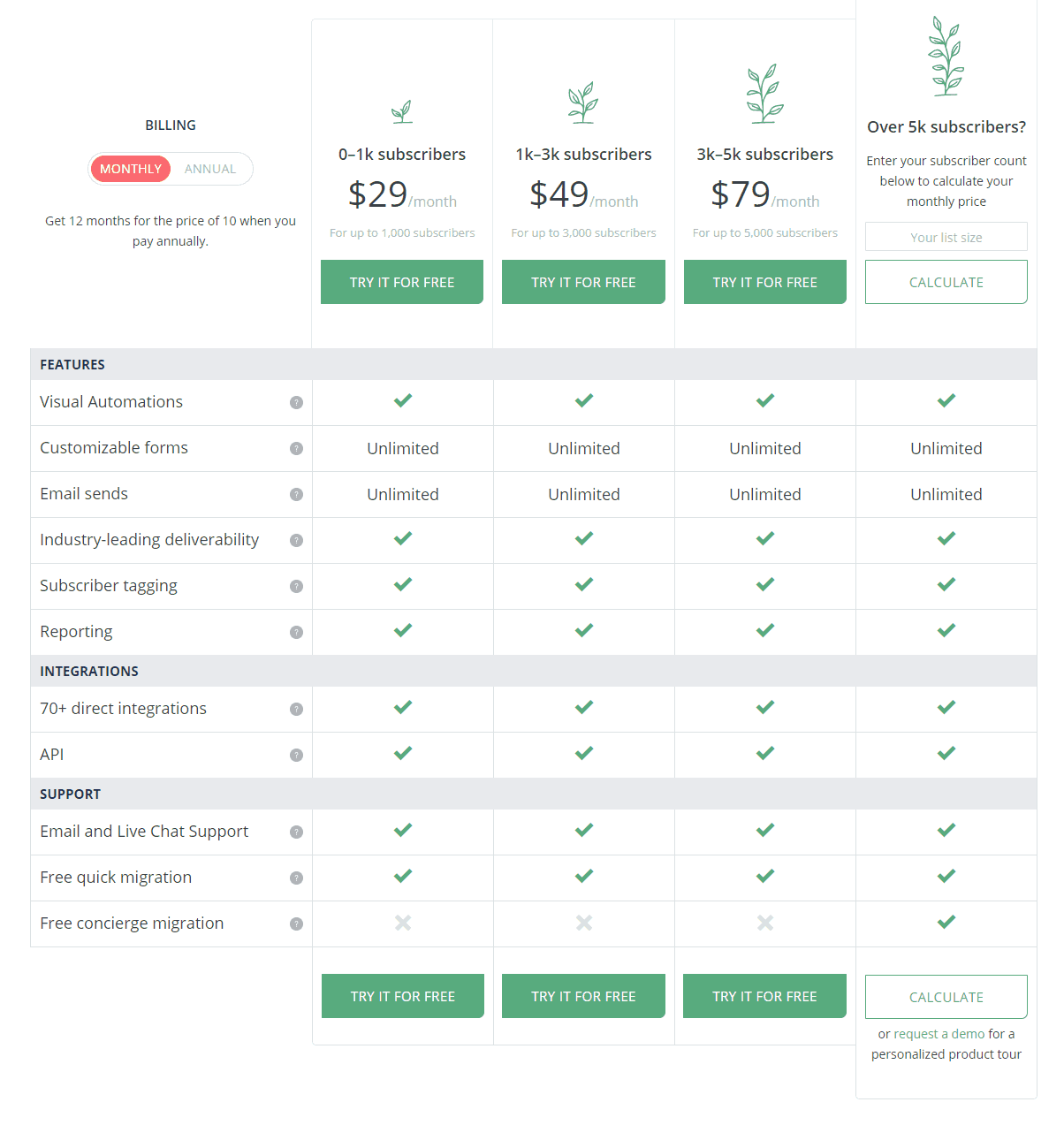 I've had a great experience with ConvertKit so far.

While not ideal for large enterprises that require significantly advanced features, most people will be satisfied with how easy it is to use.

How To Use iWriter For Cheap, Fast, Quality Content [Review]

The Best Places To Buy Websites