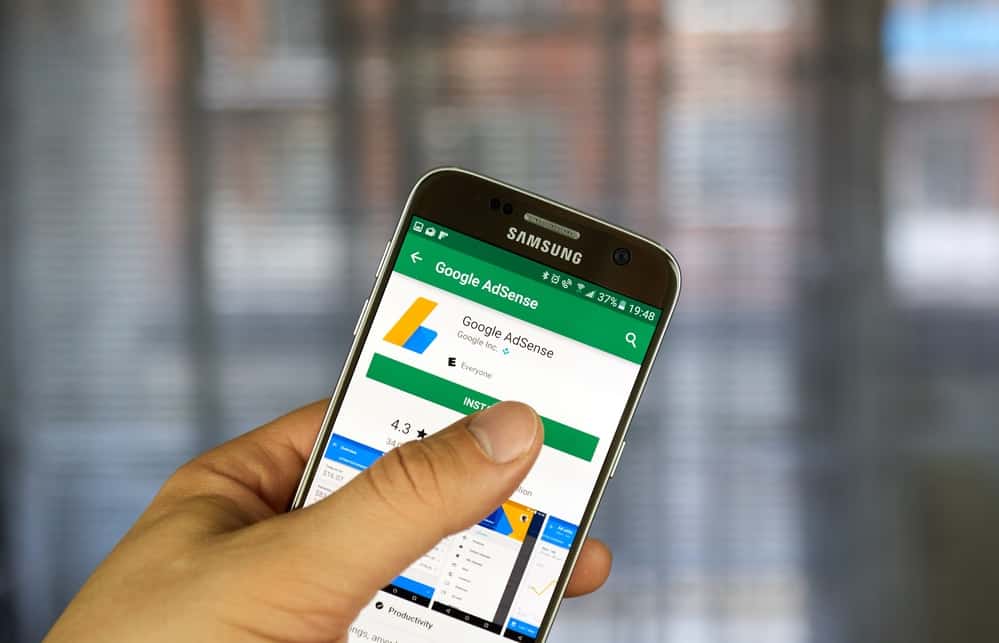 In this post, I’m going to unearth 100 high-paying CPC niches (as an added bonus you can also download my full 1,045-strong AdSense Keyword list- click here to scroll down). I’m also going to show you how I’d get traffic for these keywords, including live site examples of sites ranking for $55+ CPC keywords.

The keyword list includes their Keyword Difficulty scores and Monthly Search Volume, according to Ahrefs.

I created this list by analyzing the keywords Quora ranks for, filtering it for keywords that have over a 5,000 monthly search volume, and rank ordering the list by the terms with the highest CPC.

My recommendation: If you want to quickly rank for some of these keywords, I’d recommend trialing HireWriters, my favorite Native-English, article-writing service. I’m getting 1,000 words for between $8-$12! Click here to read my tutorial. It includes a video walkthrough & a writer instructions swipe file to ensure you order content that ranks.

A quick note: a lot of the keywords on the list will look pretty weird.

(1) For example, a term like “Cornell email” might seem strange, but the reason it’s such a high CPC term is likely because it attracts advertisers spending in the ‘college education’ as well as ’email provider’ niches.

(2) The term “I will“, ostensibly a search related to grammatical syntax, has an $80 CPC because it snags high-spending advertisers in the legal niche who are bidding on “wills”, i.e. how people dispose of their property after death.

(3) Another example is “meso compound“. According to a quick Google search, “A meso compound is a molecule with multiple stereocenters”.

But, because it includes the keyword “meso”, as in mesothelioma, there are all sorts of advertisers in the law niche bidding on this lucrative keyword hoping to attract law clients who are victims of asbestos. A quick Ahrefs search shows that mesothelioma has a $70 CPC.

You can click the Next button at the bottom of the table to view the list of 100 keywords 25 at a time. You can also enter your email below and I’ll send you the top 1,045 AdSense keywords I found:

These keywords coalesce around familiar topics. You can Google around and find a bunch of sites, including Quora, listing out these familiar AdSense niches:

My list is a bit different because it unearths some of the long-tail variations of these keywords, plus weird, low-competition options if you want to rank and bank pretty quickly.

Plus, I think listing the 10+ highest-paying CPC niches is somewhat misleading. These CPC bids aren’t definitive, as I explain a bit further down- advertiser spending is seasonal and Ahrefs itself is only providing an estimated CPC.

To say that “Mortgage” is a $45 CPC term isn’t really that informative- there are hundreds of thousands, maybe millions, of mortgage-related keywords that sit beneath, or even alongside, the primary term “mortgage”, all with different CPC stats.

Now, I’m going to take a look at content strategy. How should you use these keyword lists to profit from some of these potentially lucrative CPCs?

You can use this list to brainstorm niche site opportunities. Perhaps you can recognize a theme in the keywords- for example, web hosting, cloud computing, finance, fitness, home loans, terms that include “Google”, etc.

It might suggest a particular avenue of attack- i.e. a style of site, a way of approaching a niche that helps you rank quickly for profitable keywords. For example, a recurring theme in these keyword lists is anything that includes the term “Google”:

A big brand term, there are probably a bunch of Google competitors bidding to display their ads on websites with Google content or audiences conceivably interested in tech.

If you already run a website in a particular niche, you can use this list, or generate your own using Ahrefs or SEMRush, and isolate long-tail keywords that have a high CPC. For example, run Ahrefs on massive content forum sites like Quora and Reddit, analyze their rankings, type in some niche-relevant phrases, and then sort the resulting list by highest Cost Per Click.

You’ll find a bunch of terms like these- weird, long-tail keywords, with low competition, that oftentimes have outrageously high CPCs because they obliquely relate to a lucrative keyword like mesothelioma or personal finance.

What I Would Do

I own several broad niche sites in the product review, tech and DIY niches. This gives me a fair bit of latitude when it comes to publishing content.

For example, in the Google keyword research table above, I could easily create content about the “CEO of Google”, “best ad blocker”, “Google Keep”, or “sketchup 3d warehouse”.

Whether I would or not depends on how difficult I think the keyword is to rank for. The competitiveness of the primary keyword, let’s use “Google Keep” as an example, would influence the decision- but I would dive deeper into its long-tail potential.

For example, running “Google Keep” through Ahrefs’ Keyword Explorer tool, these are the top 25 results that contain the term:

As you can see, you don’t necessarily need to rank for “Google Keep” itself to get traffic make some decent money. You can structure the content to include things like “Extension”, “Desktop”, “App”, and “Evernote” to acquire targeted, long-tail traffic.

Android Authority has a good writeup for Google Keep- you can see that above the fold they’re running ads pretty aggressively: 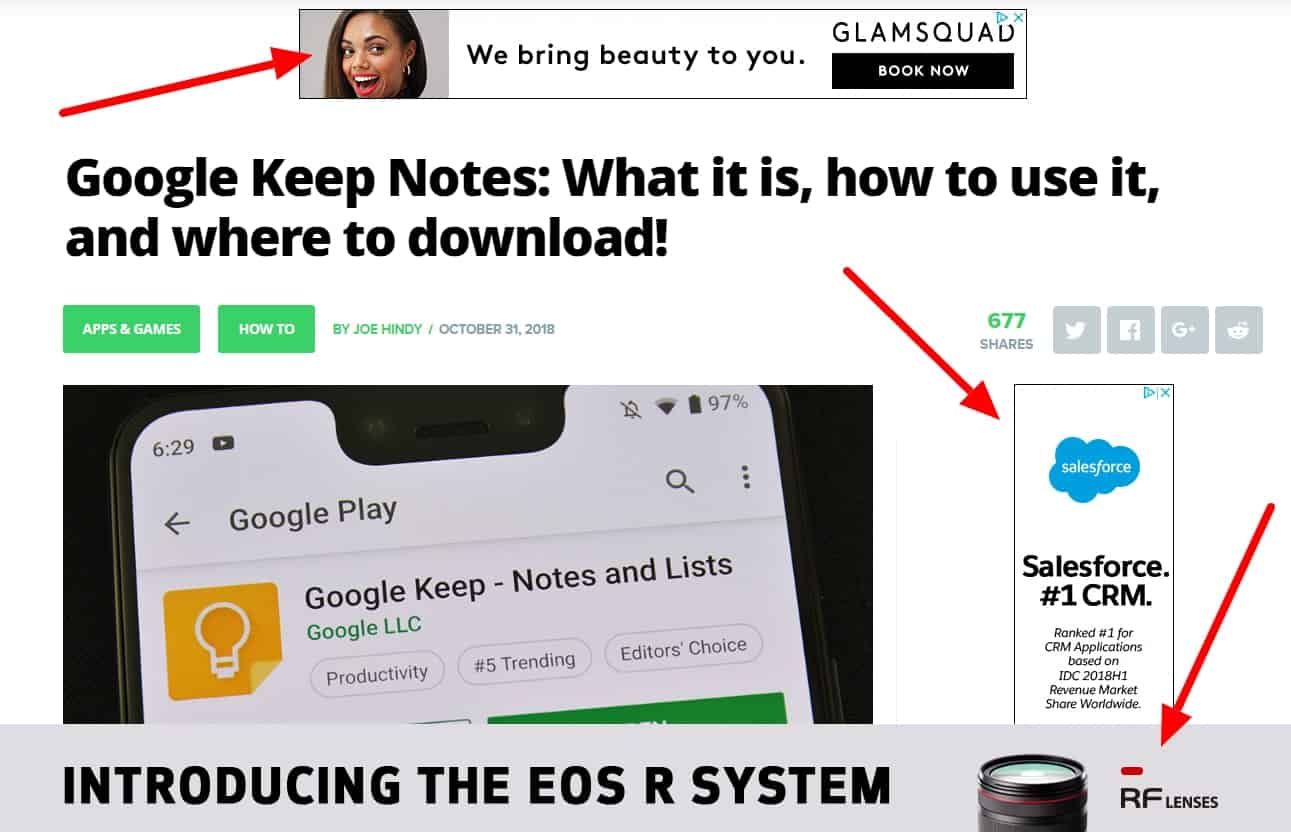 The top ad is a retargeting advertisement- my girlfriend has some interest in Glamsquad, an on-demand beauty service. So that’s why I’m getting that ad. The widget ad is for Salesforce- understandable because Android Authority is a tech site. Not sure why the RF Lenses ad is displaying- I don’t know if that’s automated, or perhaps a purchased banner ad.

It might be that Canon, who makes the RF Lenses, bought the ad directly from the site, or through a network- but it’s not an AdSense ad.

Another example is LaptopMag.com which ranks for the lucrative, $100 CPC term “Google Docs superscript”: 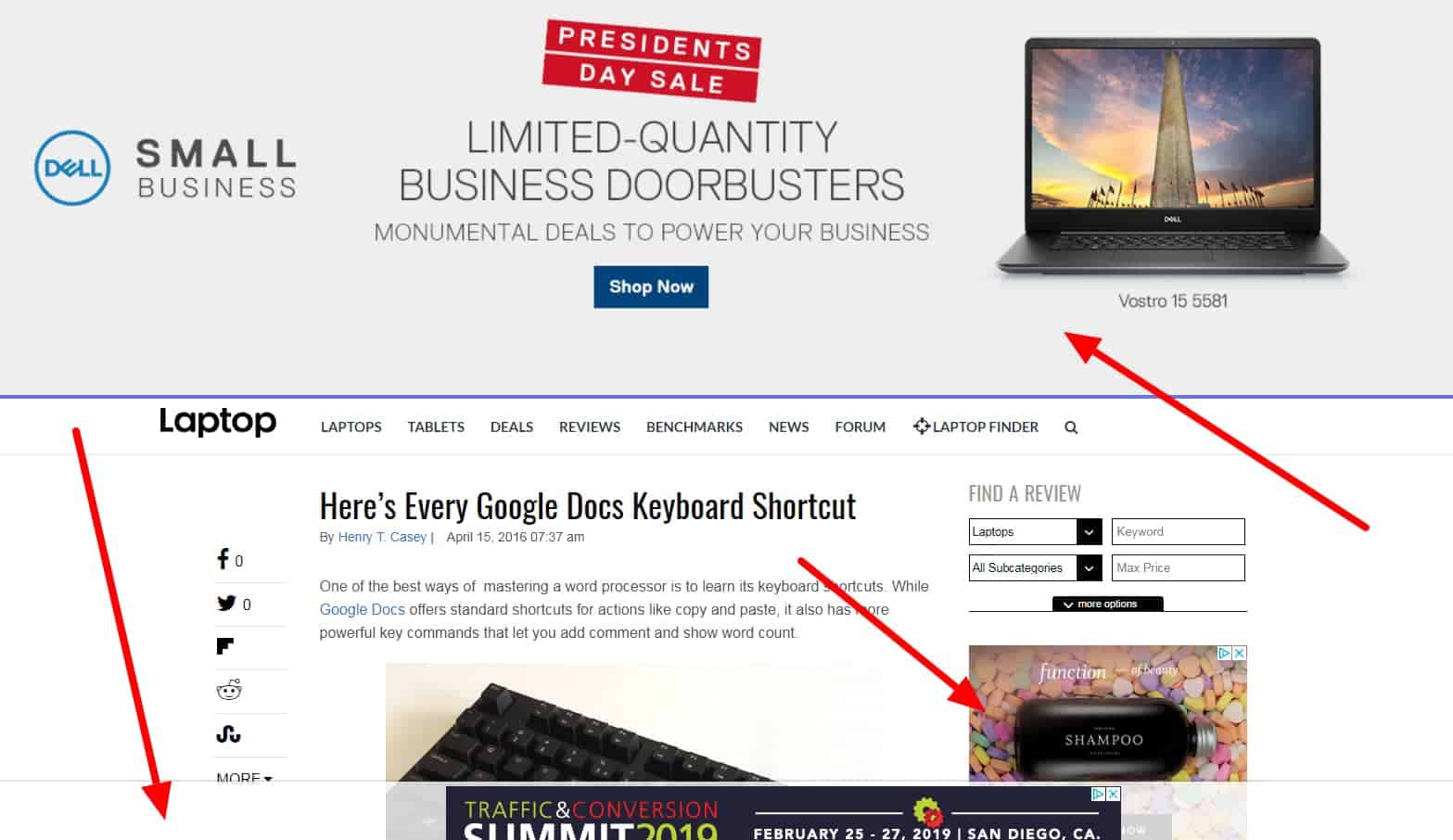 As you can see, above the fold there are two AdSense units and a Welcome Mat-style dropdown which appears to be an affiliate promotion.

The smart thing about that, whether it’s a sponsored banner ad or an affiliate unit, or even both, is that an AdBlocker isn’t going to eliminate it from your site. It’s a bit of a workaround- ad blocking technologies cost publishers billions every year in lost revenue opportunities.

That said, the recipe isn’t that difficult. If you have a tech niche site, it makes sense to publish content that includes some of these high-paying AdSense keywords.

In this case, the site includes this profitable keyword as part of a Google Docs Keyboard Shortcut post- and didn’t dedicate an entire post to it. Which makes contextual sense- the keyword belongs to the broader category of Google Docs keyboard shortcuts- though it’s really your call whether or not a keyword deserves its own post, or whether it should reside within the content of a broader category topic.

I would either outsource it to HireWriters or use a writer on UpWork to create the content.

The term AdSense is essentially a placeholder term for general ‘display ads’. On my display ad sites, I don’t actually use AdSense directly. Instead, I use Mediavine.

They are an ad network that serves and optimizes both AdSense ads and other ads from their own inventory. This has resulted in much higher ad revenue than if I was using and optimizing AdSense myself.

They take a cut of the revenue, but I’m fine with that because the earnings are better than I could manage on my own split-testing placement and managing different ad networks, like Media.net, Amazon ads, Taboola, etc.

It’s also important to understand that these CPC numbers are just estimates. It isn’t cut in stone that if you rank for “Cornell Email” that you’ll be earning $280 a click. Personally, I find that extremely unlikely.

In addition, when it comes to advertiser spending, it’s pretty seasonal.

Medavine publishes some outstanding research from their internal network of publishers to demonstrate this. The graph below is from 2016, but I can attest that it remains accurate- December is an amazing month, but ad buying apparently drops off of a cliff the 1st day of January: 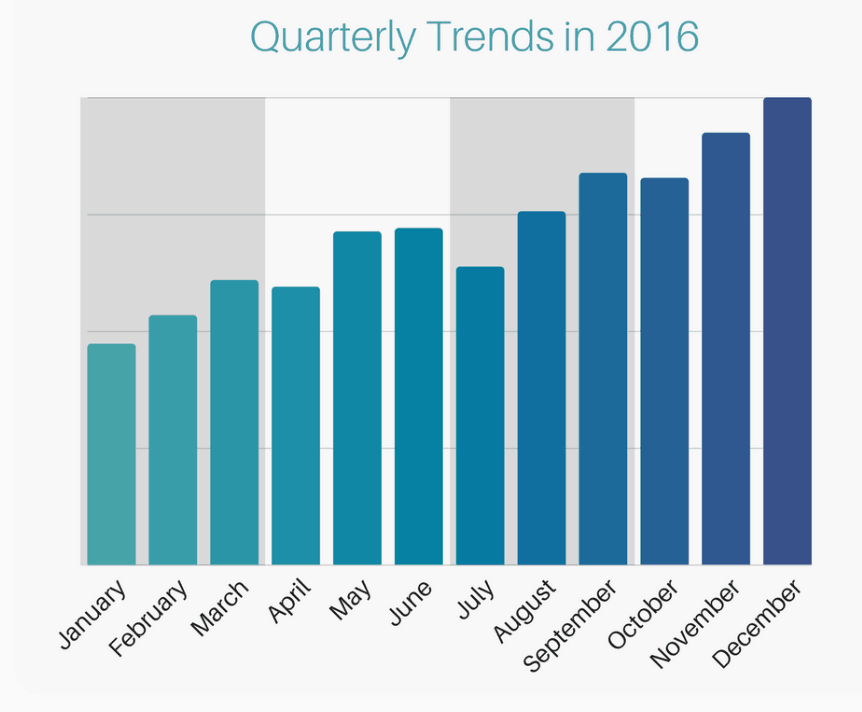 On my tech site, revenue basically halved overnight. I was making ~$160 a day and once January hit, I was knocked back down to earth.

As of this writing, it’s mid-February, and the ad venue, true to form, is incrementally climbing back up. It’s a different game than affiliate marketing. My primary affiliate site generally earns more and more month on month, with a large, outlier Christmas spike.

As an added bonus, I compiled 100 of the lowest Keyword Difficulty, highest CPC keywords that Quora ranks for:

Again, there’s a lot of weird words in this list.

I’ve run Google Ads for startups, big companies, and for individuals- you always want to include a Negative Keyword list so your ads don’t end up displaying in the SERPs for “Marvel database”.

Some of them remain pretty obscure to me- but if I were to research some of the individual keywords I’d probably discover an industry keyword that’s pretty valuable.

The point here is that if you’re planning on building out an AdSense site, one effective strategy is creating content that ranks for keywords advertisers are bidding for.

It doesn’t mean that if you stray outside of these keyword concepts you won’t make any money, but there’s definitely some niches that pay better than others. Another thing to be conscious of- advertisers value United States traffic over and above other countries.

If you create content that brings in traffic from India, for instance writing about Bollywood films, you’re not going to see high CPC clicks or CPM on your site.

Display ads enable you to monetize informational content- which is another benefit. As opposed to trying to rank for buyer terms like “best iPhone”, you can write about “dank memes”, where there’s no product to promote, and still monetize the content.

That provides an enmorous amount of latitude and is one of the things I like best about display ads- you can write about things that interest you. Let me know what you think in the comments section!